County Donegal, like all other counties in Ireland, has a long history of emigration and people of all denominations emigrated at various times for various reasons down through the centuries. However, there were patterns of more pronounced emigration at certain times. The early 18th century exodus was thought to be mainly Presbyterians who went to North America and beyond in search of religious freedom, land and a better life. Many of these people initially emigrated from Scotland to Ireland for the same reasons. In the years after the Famine emigration was predominantly Catholic. Much has been written about the ‘push and pull’ factors that influenced emigration down through the centuries and many of the emigrants who left Ireland were influenced by both. Some people emigrated of their own free will to escape a lifetime of poverty or subjugation and in search of a better life. Some took advantage of assisted passenger schemes while others left less voluntarily through enforced emigration schemes, orphans were sent to Australia and Canada, people were prosecuted for trivial offences and transported as convicts, families were sent from workhouses to alleviate a Poor Law system that depended on the financial support of the landlord class. Ruthless landlords carried out evictions and tenants were forced to emigrate, notably the Derryveagh evictions, where 47 families were evicted from their humble abodes. Many of these families emigrated to Australia with help from the Donegal Relief Fund, set up in earlier years in Australia to help distressed people in Donegal. Many of those who emigrated from Ireland either sent money back to Donegal to help their families in Ireland survive or to help them emigrate. 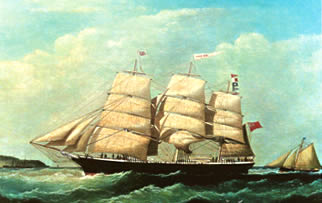 This is one of the ships from the McCorkell line which sailed out of Derry port carrying emigrants and cargo to the Americas during the 19th century. Derry was the main port for emigrants from Donegal travelling to the New World until the steamship took over in 1897.

Donegal’s population in the 1850s, especially in the coastal areas, was largely Gaelic-speaking. Many of the poor from these areas emigrated during the 19th century, speaking only as Gaelige. Derry was the main port for emigrants from Donegal travelling to the New World until the steamship took over in 1897. People from south and southwest Donegal emigrated from Sligo or in many cases people from Donegal would go first to Glasgow or Liverpool and then take a ship to North America. Many stayed in Britain. Most of those who emigrated during the 19th and early 20th centuries were poor and unskilled. For some decades towards the end of the 19th century and early 20th century, female emigration exceeded that of males.

Ship from the McCorkell line which sailed out of Derry port carrying emigrants and cargo to the Americas during the 19th century.