The indexation of genealogy records was started by a local voluntary committee in Ramelton in 1988 and was supported by a government sponsored training scheme. In 1992, the committee decided to expand the genealogy service and this led to the formation of Donegal Ancestry CLG.

Donegal Ancestry CLG is a company limited by guarantee with no share capital and no distribution of profits. The company has charitable status and is administered by a Board of Directors. The Directors are voluntary and are drawn from representatives of the major churches, the local community and from the public and private sectors.

The company is no longer in receipt of financial support from either the government or local authority. Income derived from research fees is used for the continued development and provision of a genealogy service for County Donegal.

The Ramelton Centre closed in 2010 following the cessation of public funding.  Directors plan to re-open a Centre for Co Donegal as soon as it is feasible to do so.  In the meantime, the genealogy research service is being continued by Mrs Joan Patton from her home in Rathmullan (pictured below). 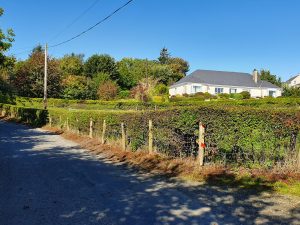 Donegal Ancestry CLG is a member of the Irish Family History Foundation.